Variables are symbols that can take different values. You might be familiar with variables from other languages from your prior programming experience. Variables in Postman work the same way.

Variables allow you to reuse values in multiple places so you can keep your code DRY (Don’t Repeat Yourself). Also, if you want to change the value, you can change the variable once with the impact cascading through the rest of your code.

Let’s say you have 3 API endpoints that use the same domain - your-domain.com. You can save this domain as a variable and instead of repeating the value, you can use /endpoint1and /endpoint2 in the request builder. Now, if your domain changes to another-domain.com, you just have to change this value once.

With Postman’s scripting engine you can set variable values, copy data from one request and use it into another request, and more.

The following scopes are available to you:

Scopes can be viewed as different kinds of buckets in which values reside. If a variable is in two different scopes, the scope with a higher priority wins and the variable gets its value from there. Postman resolves scopes using this hierarchy progressing from broad to narrow scope.

Accessing variables in the request builder

Since variables in the request builder are accessed using string substitution, they can be used everywhere in the request builder where you can add text. This includes the URL, URL parameters, headers, authorization, request body and header presets. Postman evaluates the variables according to scoping rules as discussed in the Variable Scopes section and sends them to the server.

Variables can also be used in pre-request and test scripts. Since these sections for scripts are written in JavaScript, you will initialize and retrieve these variables in a different manner. You can initialize variables in scripts and put them in a particular scope.

The Collection Runner lets you import a CSV or a JSON file, and then use the values from the data file inside HTTP requests and scripts. We call these data variables. To use them inside Postman, follow the same syntax as environment or global variables.

Variables inside the Postman UI are enclosed inside curly braces. For example, in the screenshot below, and inside URL parameters would be replaced by corresponding values from the data file:

Inside pre-request and test scripts, the special data object contains values loaded from the data file for a specific iteration. For example data.username or data["username"] would let you access the value of the username variable from a data file.

Postman has a few dynamic variables which you can use in your requests. Dynamic variables cannot be used in the Sandbox. You can only use them in the {{..}} format in the request URL / headers / body.

Quick Look is a quick preview feature displaying all your environment and global variables in one place. Click on the “eye” icon in the top right to toggle the display, or typing the keyboard shortcut (CMD/CTRL + ALT + E). 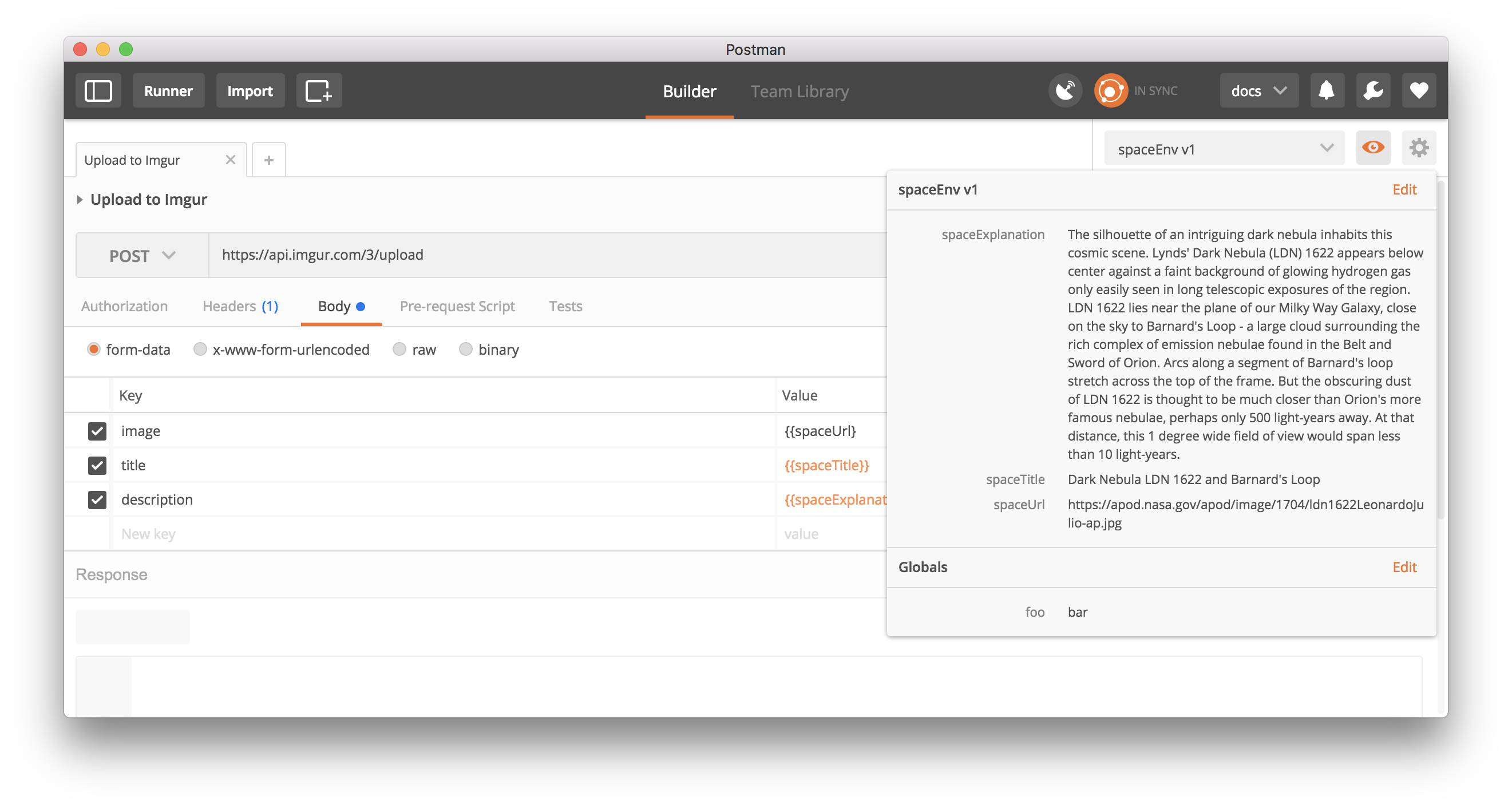 Autocomplete and tooltips for variables

Type an open curly bracket to bring up the autocomplete menu. For the pre-request and test scripts section, which uses the data editor, entering the first letter of a variable triggers the autocomplete. The menu contains a list of all the variables in the current environment, followed by globals. Navigating through the list also shows the current value and scope for each variable, along with a feedback for overridden variables.

Variable highlighting and tooltip on hover

Variables are highlighted in orange, with unresolved variables shown in red colour. Hovering over a variable shows its current value and the scope. If a variable is unresolved - i.e., no value in the current environment - the tooltip shows the appropriate feedback.